Indian Armed Forces conduct the TA exam which is essential to qualify in order to accomplish the employment in the military. After passing this exam, candidates will go for the physical exam. Based on their performance in both exams, they will be selected as equipped Territory Army officer. We at Major Kalshi Classes help you to qualify your written exam and get the opportunity to go for the physical test as well. Our coaching institute also helps you decrease your odds and get selected in the military as one of the experts.

One Stop Source for Territory Army Preparation in Allahabad

Major Kalshi Classes is an ideal source for TA (Territory Army) Coaching in Allahabad. We prepare students for the written exam and motivate them to focus on their physical test which is essential to go for anyone who is willing to work in Territory Army. Enroll yourself in our coaching centre and increase your chances to get selected in Territory Army.

ATTENTION: We start 6 months comprehensive course every Monday. Join Major Kalshi Classes and become an officer in Military to live your dream.

The TA examination will be conducted in two phases:

QUALIFYING MARKS: Minimum 40% marks in each part of the paper separately and overall average of 50% Marks

Only male citizens of India and Ex-service officers who are medically fit.

Maximum marks in the paper one can obtain is : 100 Marks

Part – I of the Question paper is made up of Reasoning and Elementary Mathematics. The Reasoning part will be designed to test the candidates’ ability to complete sequences making logical conclusion based on simple patter of numbers, statements, figures, letters etc. The Mathematics part consists of Number System, Unitary Method, Elementary Mathematics Theory, Trigonometry, Algebra, Mensuration, Statistics and Geometry.

2. Next Step is the Preliminary Interview Board – PIB

3. And the Final Step is The Service Selection Board and Medical Board

Already employed candidates fulfilling all the eligibility criteria can apply in retort to the advertisements which are published in the leading national newspaper & The Employment News in the months of June – July and December – January every year. Applications are then to be sent to the concerned TA Group Headquarters. After processing of applications, the eligible candidates are called for Preliminary Interview Boards held at the various respective Territorial Army Group Headquarters ( which are located at Pune, Kolkata, Chandigarh, Lucknow). Selected candidates are then to go through the SSB Interview, Medical Board & Police Verification. The successful candidates are then granted commission by the President of India.

Note: Paper 1 and 2 will consists of Objective Type Questions.

11 Written exam center in all over India

Yes, 1/3rd marks will be deducted for each incorrect response

The cut-off will be decided by the commission. But candidates need to obtain minimum cut off marks in order to qualify for the next round. 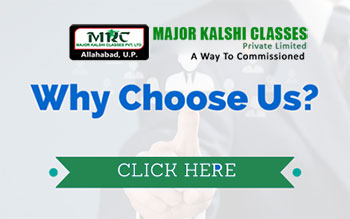 Request A Call Back!

We have no branch in Delhi. Beware of institutions defaming the reputed name of Major Kalshi Classes Private Limited.